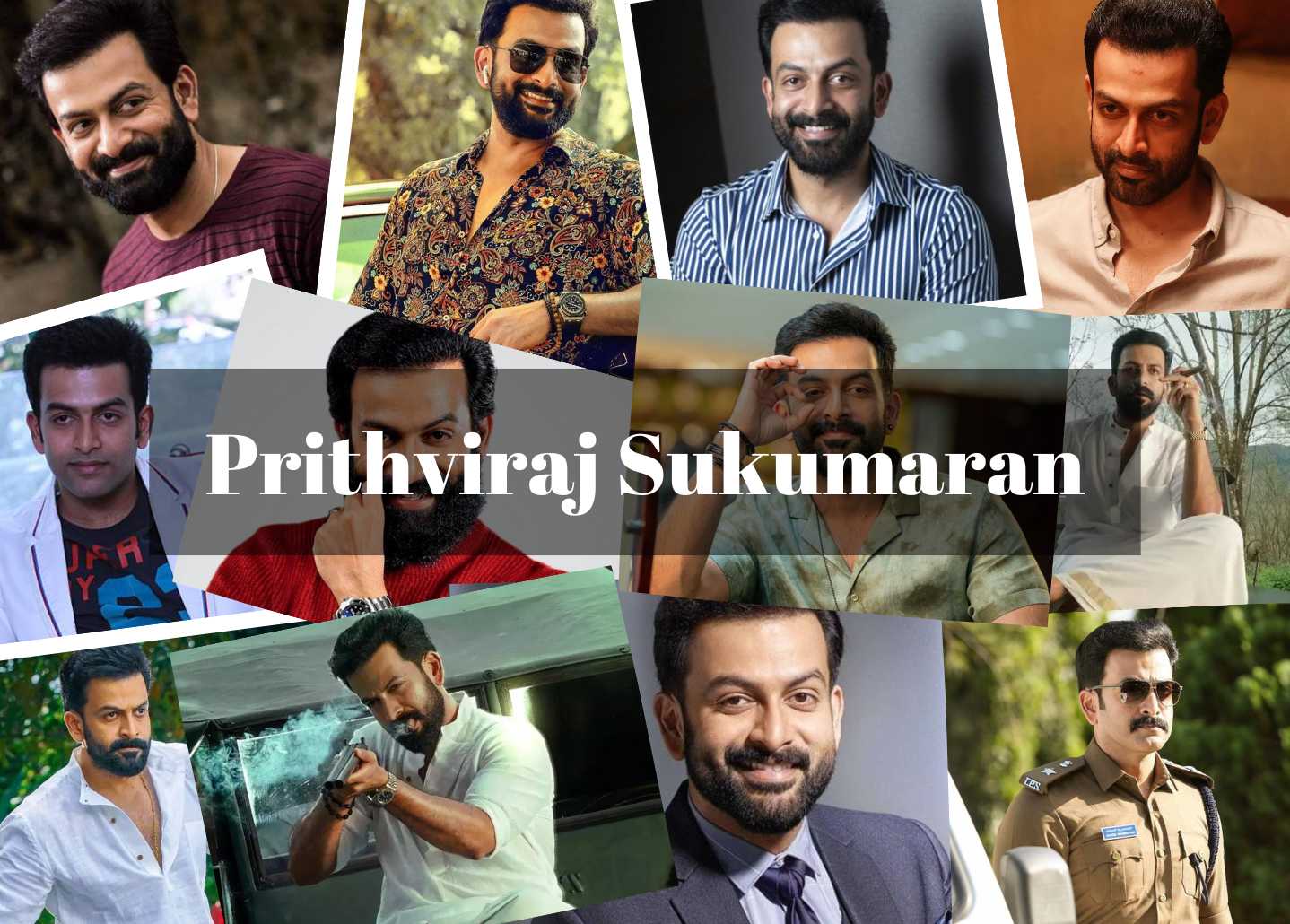 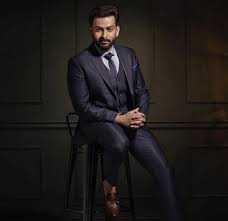 With the commercially successful movie Nandanam (2002), Prithviraj made his acting debut. With Classmates (2006), the highest-grossing Malayalam movie at the time, he made a name for himself as a significant `actor in the language. He was the youngest laureate of the Kerala State Film Award for Best Actor for Vaasthavam at 24. 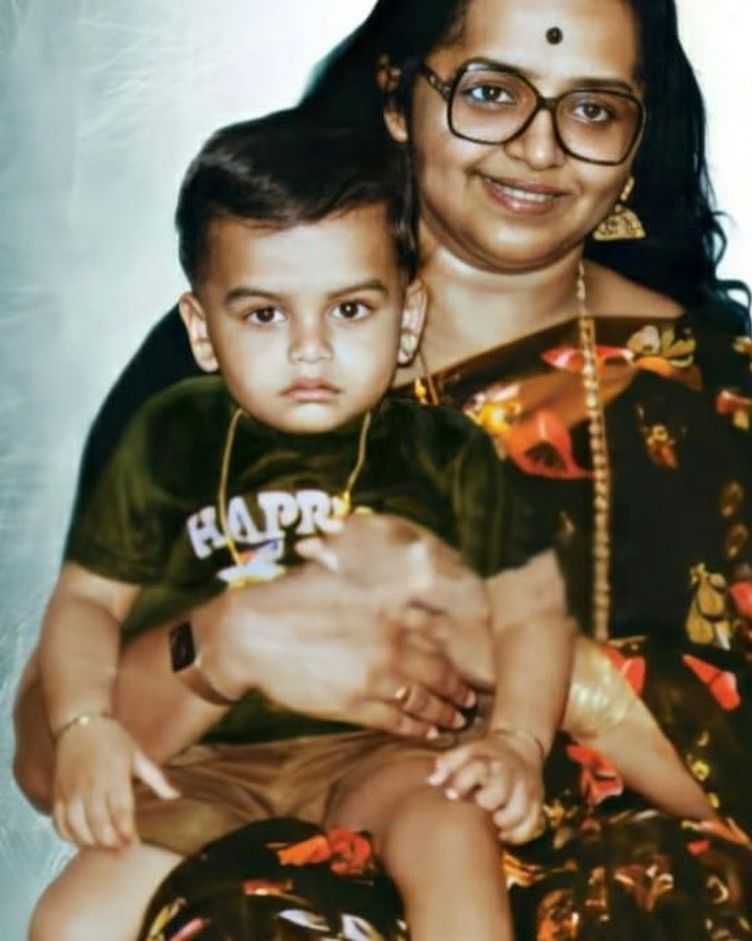 Prithviraj was born in Thiruvananthapuram. Prithviraj’s Father Sukumaran and Prithviraj’s Mother Mallika Sukumaran welcomed Prithiviraj on 16th October 1982. His family had settled in Tamil Nadu, and he went to St. Joseph's Boys School in Coonoor then Shrine Vailankanni Senior Secondary School in T. Nagar, Chennai. He attended the NSS Public School, Perunthanni after his family relocated to Kerala.

After that, he relocated to Poojappura's St. Mary's Residential Central School, where he performed in plays and skits for the institution's annual day celebrations. He finished his studies at Bhavan's Senior Secondary School in Kodunganoor and Sainik School in Kazhakootam. While in school, he participated in and won many debates and elocution contests. Prithviraj repeatedly took home the Mr. LA Fest title at the annual inter-school art competition held at Loyola School in Thiruvananthapuram.

After high school, he attended the University of Tasmania in Australia to pursue a bachelor's degree in information technology. He gave a test for the director Ranjith of the movie Nandanam at this time and was cast in the lead part. Ranjith was introduced to him by the director of the movie Fahadh Fazil. Both his sister-in-law Poornima Indrajith and his older brother Indrajith Sukumaran are performers. 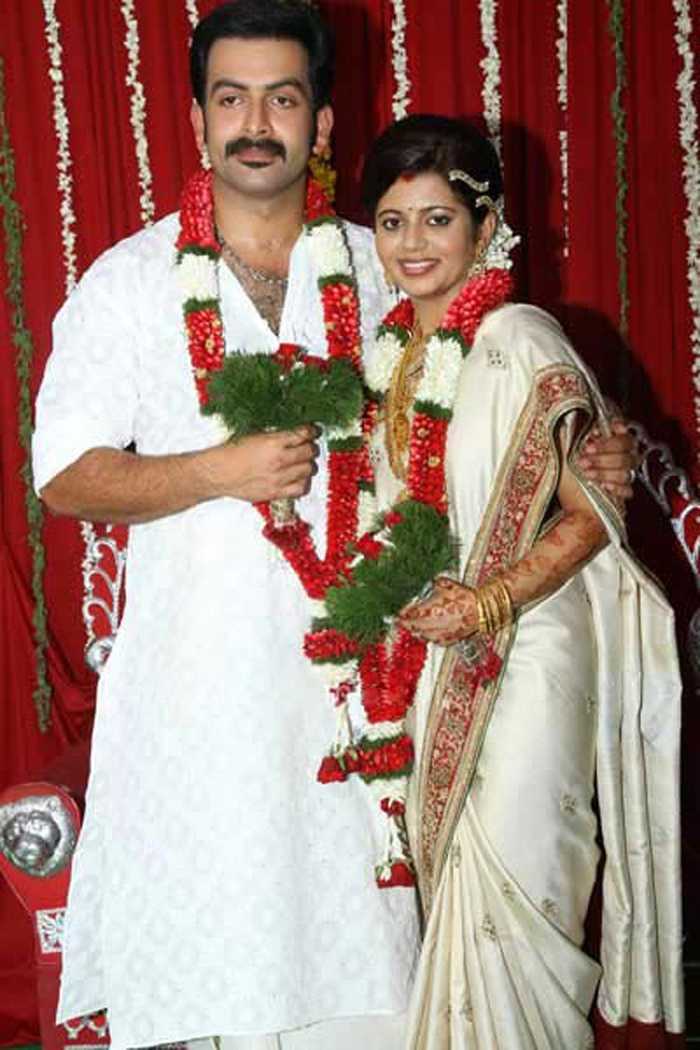 On April 25, 2011, Malayalam actor Prithviraj wed Supriya Menon in a discreet ceremony in Kerala's Palakkad. They called their daughter Alankrita when she was born in the year 2014. He discussed his wife and how they met in Mumbai in an interview with The Times of India. Despite being a Malayali, Supriya has lived in Mumbai for the majority of her life. Her hometown is Mumbai. In actuality, I was able to see Mumbai as Supriya did. Of course, I was acquainted with Mumbai before I met her. Supriya, though, was the one who took me to areas of Mumbai where I had never been.

The actor's voice grows more eloquent as he speaks of his wife as expresses thanks and respect. Supriya left her job and hometown to live in Kerala with me. I owe a lot to my wife. Without her assistance, I don't believe I would be where I am today. Supriya completed her post-graduate studies in journalism at a reputable London university. She started working as a special correspondent in rural India after joining the BBC in 2007. Travel has always been Prithviraj and Supriya's passion, and they adore exploring lesser-known locations around the globe. The pair continues to indulge in their favorite pastime, but only when it is convenient for Alankrita.

Actor, director, playback vocalist, producer, distributor, and action choreographer Prithviraj Sukumaran is primarily known for his work in Malayalam movies. He occasionally makes appearances in films in Tamil, Hindi, and Telugu. He has contributed to both popular and independent movies. In 2002, Prithviraj made his acting debut in the lead role of the Malayalam movie Nandanam. After his second piece, Nakshathrakkannulla Rajakumaran Avanundoru Rajakumari, it was published. He has since appeared in more than 100 movies. Let's Revisit some of the Best Movies of Prithviraj Sukumaran. 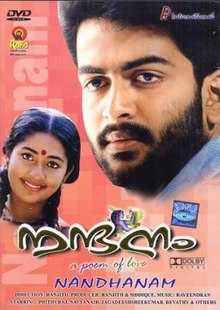 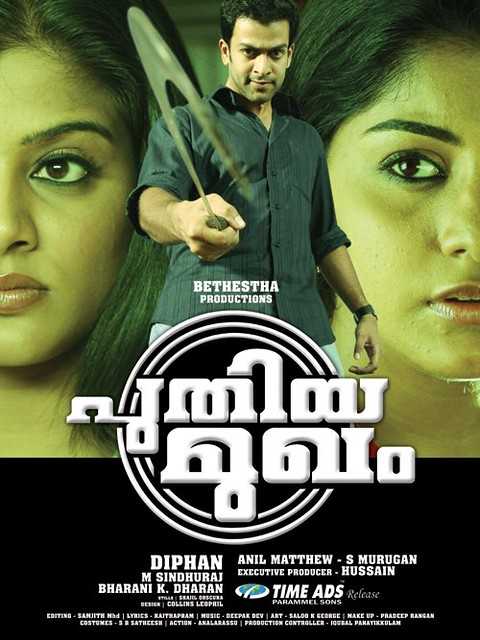 In 2009, Diphan and M. Sindhuraj released the action-thriller Puthiya Mukham in Indian Malayalam. Prithviraj Sukumaran, Bala, Priyamani, and Meera Nandan all appear in the movie. It was filmed in Malaysia, Thrissur, Palakkad, Kochi, and such places. Deepak Dev wrote the soundtrack and the original background music for the movie.

The movie was a huge financial hit at the box office and was credited with elevating Prithviraj's stardom in the Malayalam cinema industry. It was remade in Kannada as Ziddi and dubbed in Tamil under the same name. Additionally, this movie is available in Telugu as Yama Mudhuru.

Majnu and Laila are like two precious stones that are only valuable when they are together. It is currently in the possession of a Goan underworld don who is trying to sell it in an effort to keep it away from his hated son Gabbar. Don meets Pancho and Vinci, two poor goons, and offers it for 10 crores. They consent and request one week to arrange the payment. When Billy, Gabbar's man, learns of this, he makes Pancho and Vinci an offer to acquire the property for 100 crores. Blacky gives Pancho and Vinci 5 crores, which are actually the Tarkovs' (the Russian mob in Goa). They intend to steal the black money from the Podiyadis to make up the remaining 5 crores (a local hawala gang in Kerala). While the transaction is taking place, confusion arises and a major gang conflict between all the group's results. 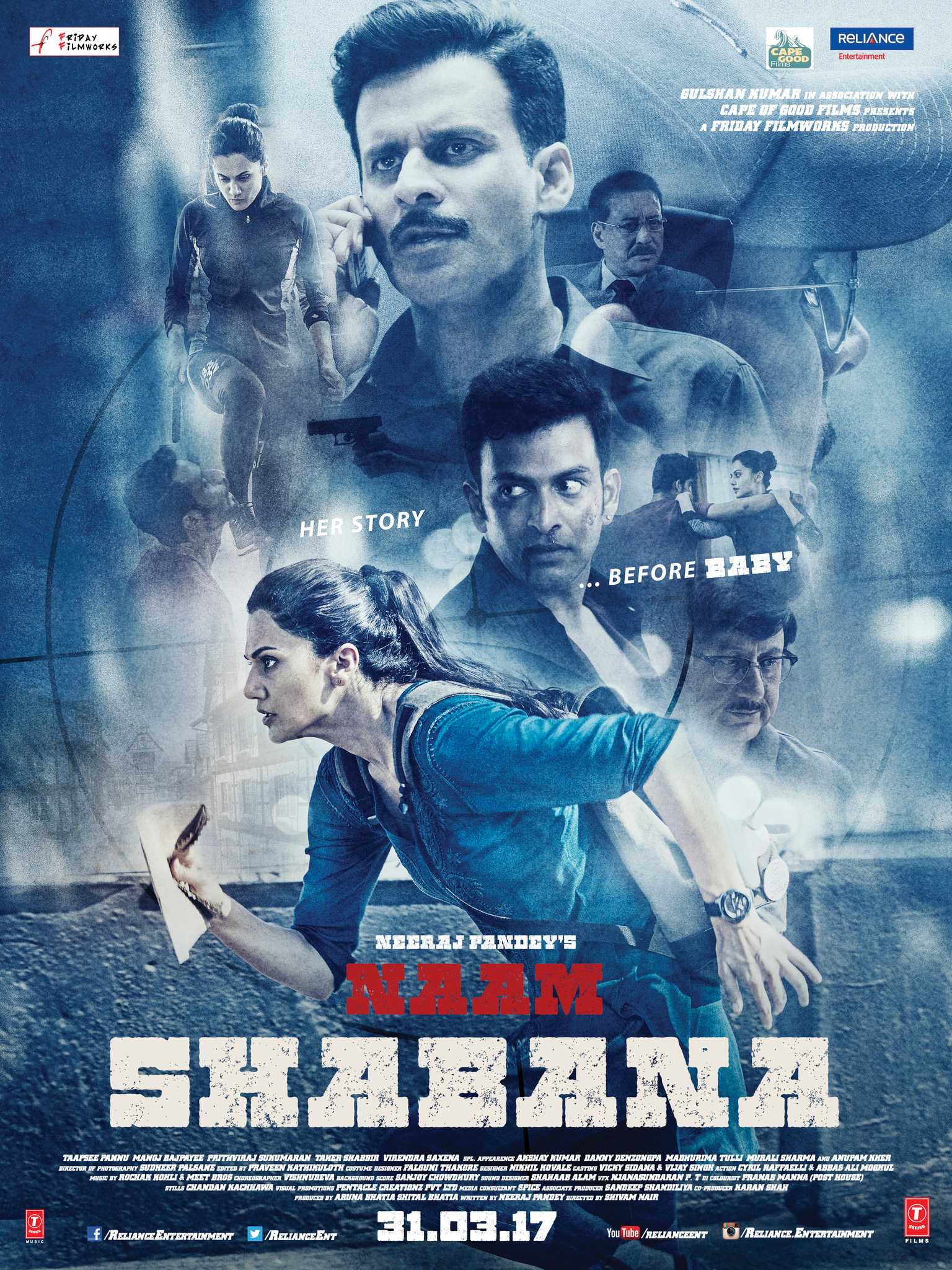 The 2017 Indian action-thriller movie Naam Shabana was written by Neeraj Pandey and co-produced by Pandey and Aruna Bhatia. It was directed by Shivam Nair. Taapsee Pannu reprises her role as Shabana in the prequel to the 2015 movie Baby. On March 31, 2017, the Telugu and Tamil dubs of the movie were made available. The Telugu title is Nene Shabana, while the Tamil title is Naanthan Shabana. The movie was outlawed in Pakistan a day after it opened there. The movie struggled at the box office.

The narrative is centred in a fight with some thugs who are making fun of a woman, a man is slain. Later, if the woman accepts to join a covert intelligence agency, she will receive a call promising to assist revenge the man's murder.

On March 28, 2019, Lucifer was presented in theatres all around the world. Additionally, Hindi and Telugu versions were released. It became the quickest Malayalam film to hit all three milestones, surpassing the 50 crore (US$6.3 million) mark in four days, the 100 crore (US$13 million) mark in eight days, and the 150 crore (US$19 million) mark in 21 days. In terms of box office receipts, revenue from the sale of satellite rights, and revenue from the sale of digital streaming rights in other languages, as of July 2021, Lucifer is the only Malayalam movie to have made more than 200 crore. 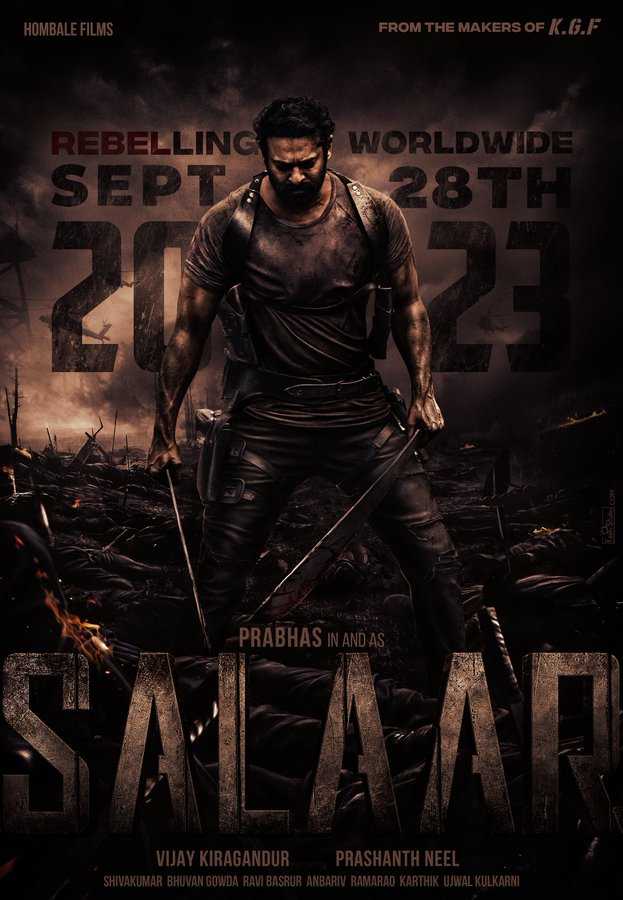 A new action thriller movie in Telugu called Salaar will be written, produced, and directed by Prashanth Neel and released by Hombale Films. Along with Jagapathi Babu, Shruti Haasan, and Prithviraj Sukumaran, Prabhas plays the film's lead role.

Principal photography for the movie near Godavarikhani, Telangana, started in January 2021 after it was announced in December 2020. Bhuvan Gowda is in charge of the cinematography, and Ravi Basrur is in charge of the music composition. The theatrical premiere of Salaar was initially planned for April 14, 2022, however it was postponed due to production issues brought on by the COVID-19 epidemic. The movie is slated for a 28 September 2023 theatrical debut. 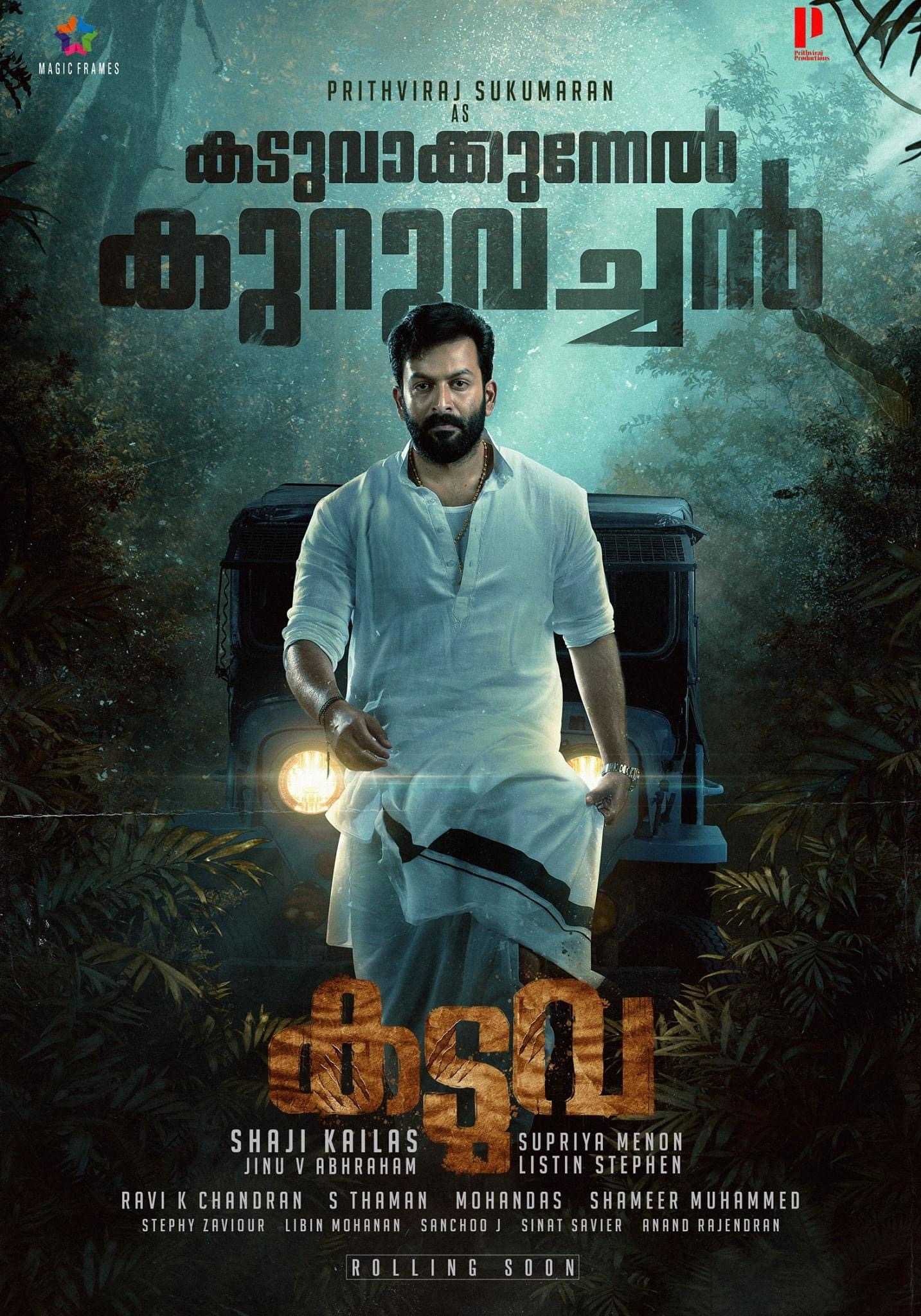 In response to criticism of certain offensive lines directed at people with disabilities in the Malayalam film Kaduva, its director Shaji Kailas and main actor Prithviraj Sukumaran issued an apology on Sunday. The protagonist, played by Prithviraj, was shown making offensive remarks toward people with disabilities and their parents in a clip from the movie, which was released on July 7.

The State Commission for Persons with Disabilities was contacted by Parivaar, an organization for parents of children with intellectual and developmental disabilities, due to the intense criticism the movie's discourse received on social media. The State Commissioner for Persons with Disabilities has sent letters to the producers Supriya Menon and Listin Stephen as well as the director Kailas, requesting an explanation for the offensive discourse. Meanwhile, Kailas posted a heartfelt apology about the incident on Facebook.

I sincerely apologize for the comments I made in the movie Kaduva that offended the parents of children with disabilities. There was a typo in the movie's dialogue. Since it was a mistake on my part, I humbly ask for everyone's pardon. Neither the dialogue's author, Jinu, the actor Prithviraj, nor I, the scene's director, were aware of the scene's potential implications Kailas posted a message on Facebook. Prithviraj shared Kailas' tweet and added an apology of his own. Sorry. A mistake was made. We accept and acknowledge it, Prithviraj wrote.

As of 2022, Prithviraj Sukumaran's net worth, as reported by several media outlets, is estimated to be around 4 million USD, or just over 30 crores. According to reports, he is the owner of a few expensive homes in Thiruvanthapuram, Chennai, Bangalore, and Cochin.

Leading entertainment websites have reported that the actor owns multiple properties in Dubai, United Arab Emirates, and runs his own production company, August Cinemas. In addition, he owns a Porsche Cayenne, an Audi Q7, and a BMW Z4. He also runs the Spice Boat restaurant in Qatar.

Apart from acting Prithviraj, earns a significant sum via gambling. Rthv participates in many advertisements and probably charges a lot for them. Additionally, he owns a sizable distribution and production company called Guit Inemas from which he unquestionably reaps significant financial rewards.

He is also a frequent guesser at stage shows, ceremonies, and ahead of nights. The building is also the headquarters for many larger businesses including Kalyan Silk, Set Homes, etc. Additionally, Prithviraj has substantial investments in the stock market and other businesses. 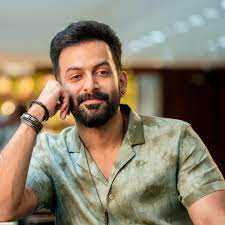 Who is Prithviraj Sukumaran?

When is Prithviraj Sukumaran’s Birthday?

Prithviraj Sukumaran was born on 16 October 1982.

Where is Prithviraj Sukumaran’s Birth Place?

The Birthplace of Prithviraj Sukumaran is Thiruvananthapuram.

What is Prithviraj Sukumaran’s First Movie?

In which year did Prithviraj Sukumaran get Married?

Prithviraj Sukumaran tied the knot with Supriya Menon on 25 April 2011.

What is Prithviraj Sukumaran’s Father’s name?

What is Prithviraj Sukumaran’s Brother’s Name?

What is Prithviraj Sukumaran’s Daughter’s Name?

What is the height of Prithviraj Sukumaran?

From Where did Prithviraj Sukumaran Complete her graduation?

Prithviraj Sukumaran Completed his graduation from the University of Tasmania in Australia.

How Much did Prithviraj Sukumaran Charge for Brand Endorsements?

What is the Prithviraj Sukumaran’s Nickname?

The Nickname of Prithviraj Sukumaran is Prithvi and Raju.

What is Prithviraj Sukumaran’s age?

What is Prithviraj Sukumaran Famous for?

With the commercially successful movie Nandanam (2002), Prithviraj made his acting debut. With Classmates (2006), the highest-grossing Malayalam movie at the time, he made a name for himself as a major performer in the language.

What is Prithviraj Sukumaran’s Wife's name?

What is Prithviraj Sukumaran’s Mother’s name?

What is Prithviraj Sukumaran’s Sister’s Name?

Prithviraj Sukumaran doesn’t have any Sisters.

What is Prithviraj Sukumaran’s Son’s Name?

Prithviraj Sukumaran doesn’t have any sons.

Who is Prithviraj Sukumaran’s Girlfriend?

What school did Prithviraj Sukumaran attend?

What is Prithviraj Sukumaran’s Qualification?

Prithviraj Sukumaran graduated with a degree of Bachelor’s Degree in Information Technology.

How Much did Prithviraj Sukumaran Charge for each Movie?

What is Prithviraj Sukumaran’s net worth?

Prithviraj Sukumaran’s net worth is $4 million.
×