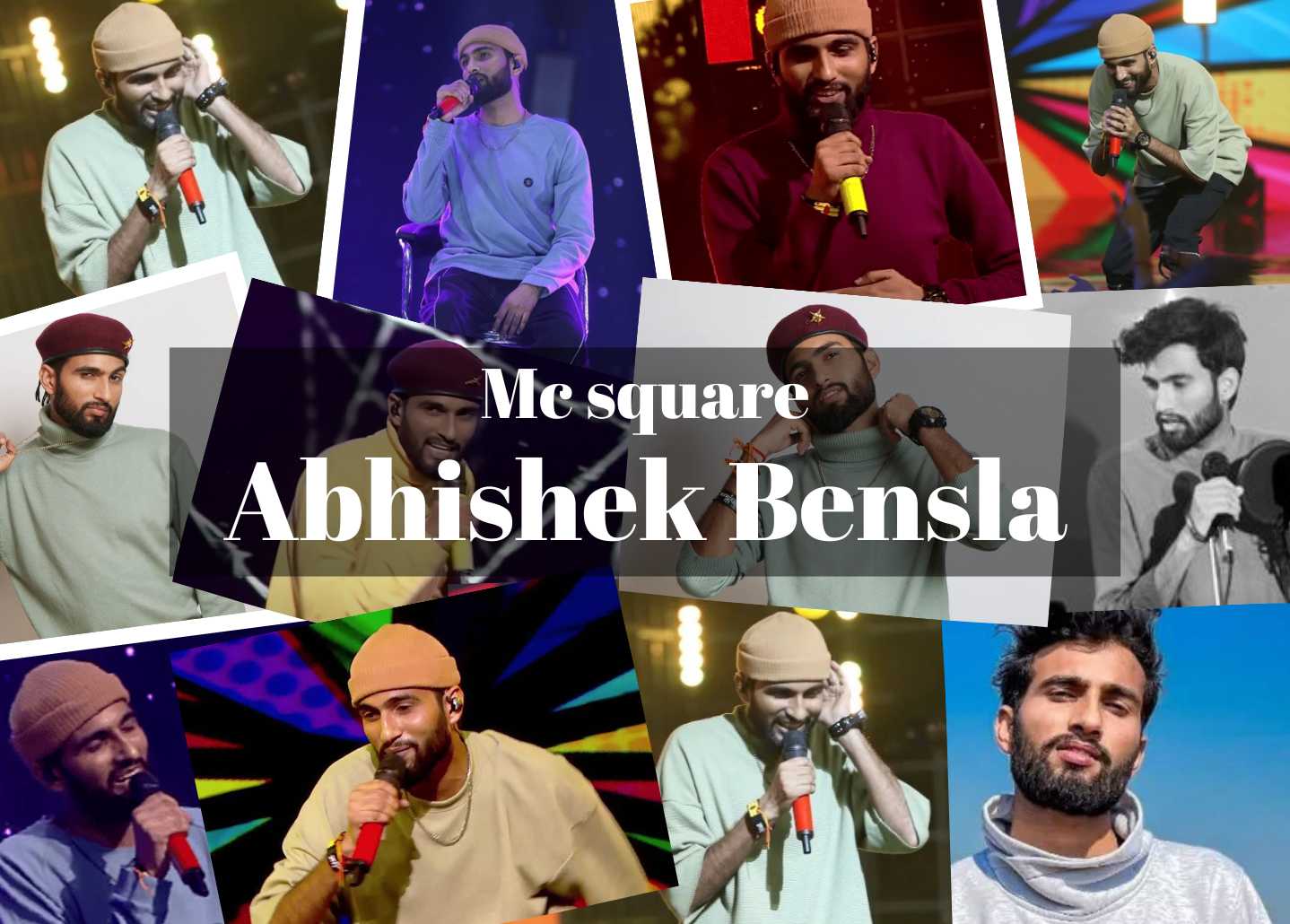 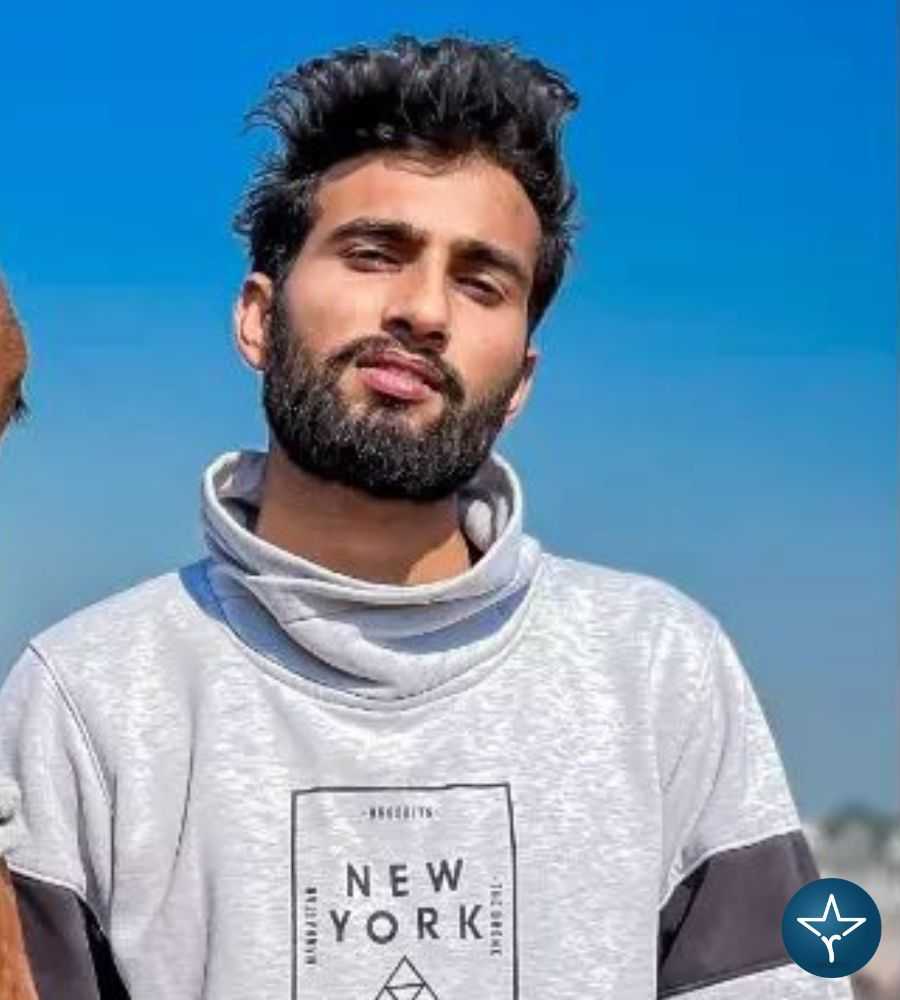 MC Square's real name is Abhishek Bensla. Abhishek Bensla is an Indian rapper and composer better known by his stage name MC Square. He received praise for his performance in season two of MTV Hustle. He entertains his fans by sharing original music on Instagram.

MC Square’s birthdate is on September 20, 1999. MC Square's birthplace is in Faridabad, Haryana, India. MC Square's age is a 23-year-old (as of 2022). MC Square rapper has a distinctive flair; he composes his lyrics in the Haryanvi language. Abhishek Bensla’s hobbies are traveling and singing.

MC Square is an Indian hip-hop musician who performs as a rapper, singer, songwriter, and guitarist. He is an Indian national who was born in Palwal, Haryana. He gained notoriety as a participant in the hip-hop reality competition MTV Hustle 2.0. 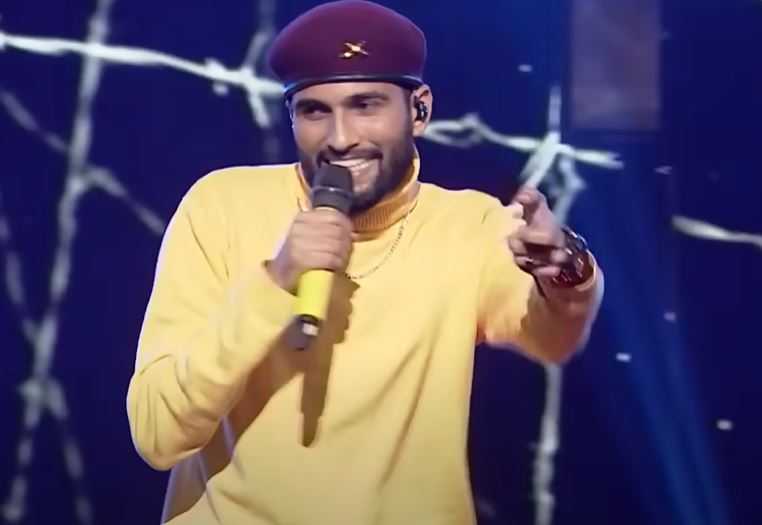 MC Square's real name is Abhishek Bensla. Abhishek Bensla, an Indian rapper and composer of music, goes by the stage name MC Square. His initial exposure came through MTV Hustle season 2, which was judged by renowned rapper Baadshah. Even the judges were unable to stop themselves from singing along to his song Badmas Chora since it was so magnificent. Rapper MC Square has a distinctive flair; he composes his lyrics in the Haryanvi language. When MC Square joined MTV Hustle 2.0, he became well-known. His initial performance takes over everyone's hearts, yet he is only chosen for the top 16.

Born into a low-income family, MC Square endured several challenges before finding success. Despite having few resources and coming from a rural background, he managed to finish school and pursue a profession in civil engineering. Abhishek Bensla’s father is Ashok Lambardar. In Faridabad, Haryana, India, he graduated from a private school after completing his primary education. He then enrolled in college to continue his education.

The first rap/hip-hop reality show to air in India is MTV Hustle. Aspiring rappers battle to become India's biggest hip-hop sensation. 2019 August 10 marked the premiere of Season 1. Raftaar, Nucleya, and Raja Kumari served as the judges for the MTV India broadcast of the competition. Presenting it was Gaelyn Mendonca. The show is broadcast online on Voot. Season 2 premiered on September 3, 2022. Badshah serves as the judge while Krissann Barretto serves as the host. Both MTV India and Voot offer internet access to the show.

For Season 2, 14 contestants were chosen from Voot Online Auditions. After Badshah chose which competitors to place in each squad, the four Squad Bosses would train and evaluate the participants based on their talent, performance, meter, technique, musicality, and storytelling. Viewers will also be able to follow along as they vote for their favorite singer through Voot's public voting system. Mcsquare was a contestant on the show. MC Square's team hustle was EPR's Rebels. MC Square was in team EPR's Rebels. MC Square's squad boss is EPR.

MC Square, raised in a low-income home, overcame several obstacles before becoming well-known. He is from a farming family, but despite having little money, he managed to finish school and pursue a career in civil engineering. MC Square rose to fame after participating in the second season of MTV Hustle, the first Rap/Hip-Hop reality series to air in India. Dino James, Dee MC, King, EPR, and Badshah served as judges for the MTV channel's broadcast of the competition, which Krissann Barretto hosted.

MC Square's powerful and energizing performance of Badmas Chora received great praise. He was chosen for the EPR team. In MTV Hustle 2.0, he sings the songs Ram Ram and Badmosh Chora. He used to write poetry before becoming a rapper since he believes that poetry is the finest outlet for one's feelings. His family and friends then urged him to add rhythms and beats to his poetry, which provided him great pleasure and gained him acclaim.

Abhishek Bensla is the true name of the rapper MC Square rapper. He is a resident of Haryana, India's Faridabad. He comes from a Hindu family of the middle class.

Hip-hop musician, rapper, songwriter, and stage performer Abhishek Bensla, also known as MC Square, is from India. He is an Indian citizen from Faridabad, Haryana.


MC Square rapper is well-known for the Indian contestants of the MTV Hustle 2.0 hip-hop reality show. The Instagram following of MC Square is currently over 12,000 and growing.

MC Square's net worth is thought to be between 1 - 2 million dollars (as of 2022). His main sources of income include singing, TV appearances, commercials, and brand promotions.

What is the stage name of Abhishek Bensla?

Why is MC Square famous for?

MC Square is famous for his appearance in MTV Hustle.

What is the age of MC Square?

What is the profession of MC Square?

MC Square is an Indian Rapper and music composer.

What are the hobbies of MC Square?

Who is the favorite singer of MC Square?

What is MC Square’s net worth?

MC Square’s net worth is $1 Million.

What is MC Square's real name?

Who is MC Square?

MC Square is an Indian Rapper.

When was MC Square born?

What is the birthplace of MC Square?

Who is the father of MC Square?

What is the favorite food of MC Square?

What Is the qualification of MC Square?

MC Square is a Graduate in Civil Engineering.

What is the height of MC Square?

Yes, MC Square was the winner of MTV Hustle 2.0

What is MC Square's age?

What is MC Square's phone number?