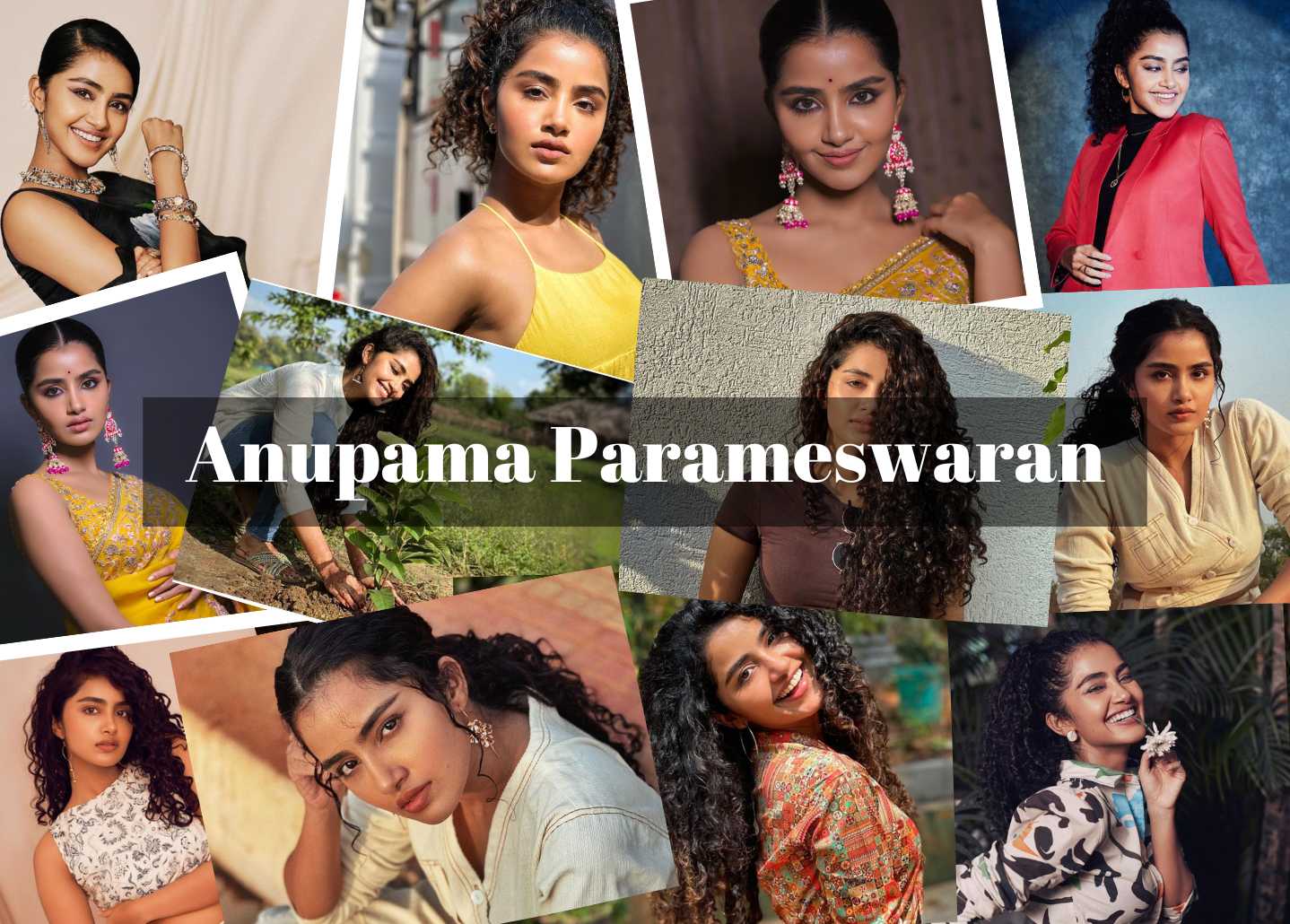 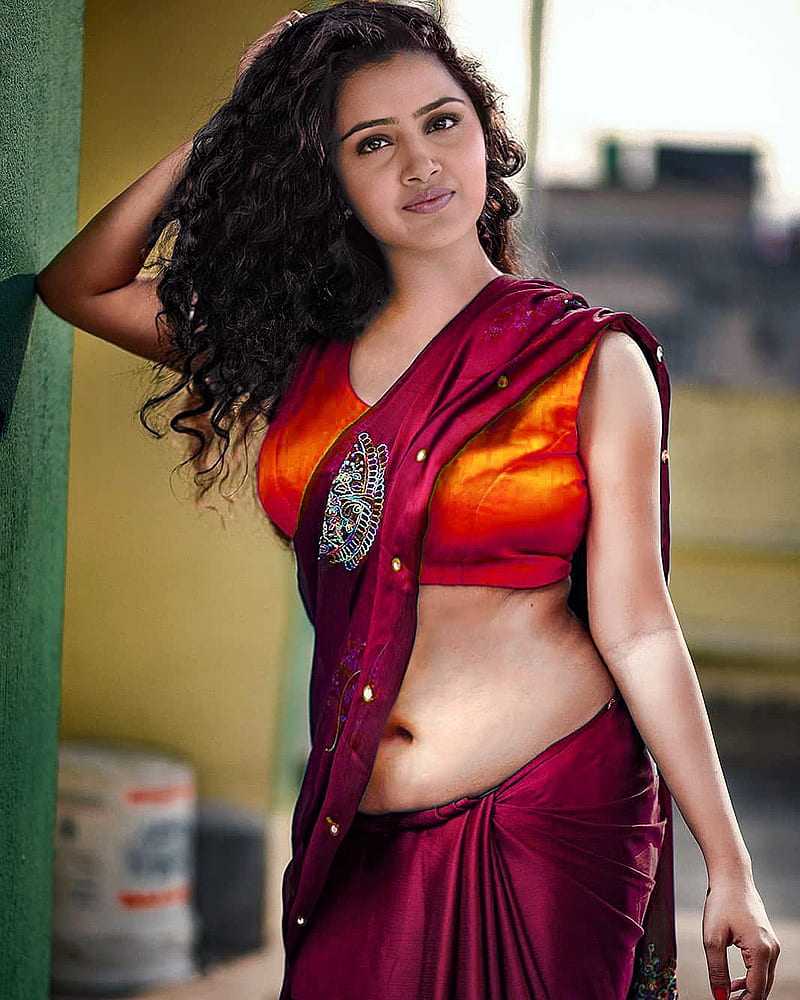 Alongside Nivin Pauly, Anupama made her acting debut in the commercially successful film Premam. She then made a cameo appearance in the Malayalam movie James & Alice. Later, she made her debut in Telugu cinema with a few films, including A Aa, in which she co-starred with Samantha Ruth Prabhu and Nithiin in a lead role. She later appeared in Premam's Telugu version. She played the lead opposite Dhanush in her upcoming film Kodi, which marked her debut in Tamil cinema.  She also appeared in the Telugu movie Shatamanam Bhavati with Sharwanand in January 2017, followed by the Malayalam movie Jomonte Suvisheshangal with Dulquer Salmaan in the same month.

She then worked on Merlapaka Gandhi's Krishnarjuna Yudham opposite Nani and A. Karunakaran's Tej I Love You opposite Sai Dharam Tej after Vunnadhi Okate Zindagi against Ram Pothineni. In Hello Guru Prema Kosame, she was partnered up once more with Ram Pothineni. Anupama made her Kannada film debut in 2019 with Natasaarvabhowma, costarring Puneeth Rajkumar. She then had an appearance in the Telugu movie Rakshasudu. She starred opposite Atharvaa in the Tamil film Thalli Pogathey in 2021. She played Ashish's counterpart in the Telugu movie Rowdy Boys in 2022. She appeared in Karthikeya 2, a Telugu sequel to Karthikeya, in the same year's second Telugu film.

Anupama was born to Parameswaran Erekkath and Sunitha Parameswaran on February 18, 1996, in Irinjalakuda, Thrissur district, Kerala, to a malayali family. Akshay, her younger brother, is her. Prior to leaving school to pursue acting, she studied Communicative English at CMS College Kottayam in Kerala.

It was rumored that Anupama Parameswaran Chiranjiv Makwana were dating. Although nothing has been confirmed. 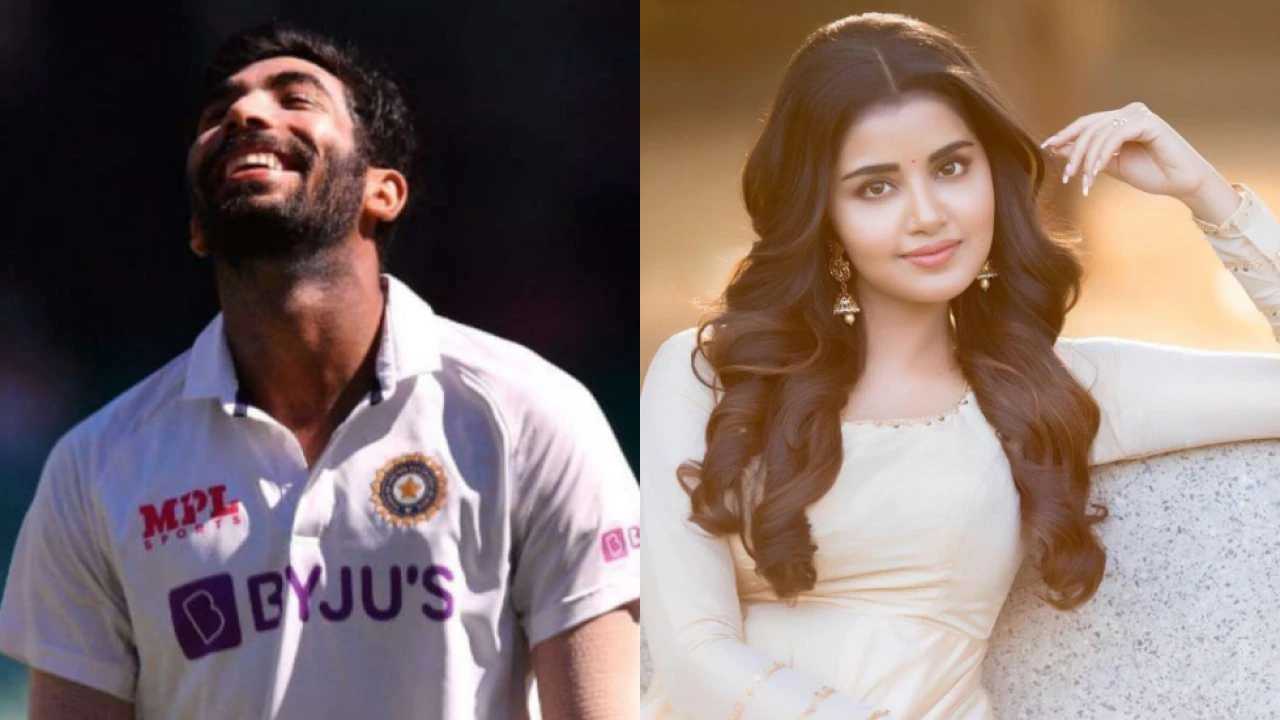 Jasprit Bumrah, a great bowler for Team India who has retired from international cricket to get married, is the subject of numerous rumors about his prospective spouse. Many prominent names of women from many walks of life have started to catch people's attention as they play guessing games on social media.

Numerous rumors claimed that the South Indian actress Anupama Parameswaran and the pacer were engaged to be married. People began spreading rumors that they were dating and engaged as soon as they learned that Bumrah was taking a personal break to prepare for his marriage.

Anupama's mother has categorically refuted all of the rumors, putting an end to them all. The actress' mother recently denied all rumours that her daughter was getting married to the famous bowler in an interview with a web portal.

Alphonse Puthren wrote and directed Premam, an Indian coming-of-age romance movie  in the Malayalam language. In addition to Sai Pallavi, Madonna Sebastian, Anupama Parameswaran, Shabareesh Varma, Krishna Sankar, and Siju Wilson, it is produced by Anwar Rasheed and stars Nivin Pauly. From their teenage years until maturity, the story follows George (Nivin) and his buddies. Malar (Pallavi), a college lecturer, reignites his love interest while George's first love proves to be a letdown. Through numerous stages of his amorous journey, he discovers his calling.

The film, which had a production budget of $4 crore but made $60 crore, was a commercial success. The movie eventually developed a cult following after being named one of The Hindu's top 25 Malayalam films of the decade. The film received recognition for its direction, screenplay, Nivin and Pallavi's acting, music, cinematography, and editing, as well as awards and nominations in a number of categories. In Kerala, the movie was in theatres for 175 days, while Tamil Nadu saw it for more than 300 days. The movie had a 2016 Telugu remake with the same name.

The movie also won six Vanitha Film Awards, three Asianet Comedy Awards, four Asiavision Awards, and two CPC Cine Awards, among other honours. The Kerala State Cinema Awards, the recognised state film award presented by the Keralan government, did not, however, consider the film. Film Companion listed Nivin's performance as one of the top 100 performances of the ten years. 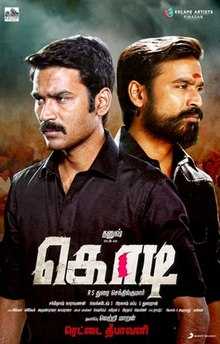 The 2016 political action drama film Kodi, also known as Flag, was written and directed by R. S. Durai Senthilkumar and produced by Vetrimaaran under the auspices of his company, Grass Root Film Company. In addition to Saranya Ponvannan, S. A. Chandrasekhar, Kaali Venkat, Namo Narayana, and G. Marimuthu playing important roles, the movie stars Dhanush, Trisha, and Anupama Parameswaran in the prominent roles. The first time Dhanush and Trisha pair up. Anupama Parameshwaran makes her debut in Tamil with the film Kodi. Dhanush performed two roles for the first time in his professional life.

The male main actor in this movie was played by Dhanush, who also produced the two films directed by R. S. Durai Senthilkumar, Ethir Neechal and Kakki Sattai, which starred Sivakarthikeyan in the lead role. Santhosh Narayanan composed the music and background music for the movie, and Venkatesh S handled the cinematography. A day following the Tamil version's release, the movie also had a Telugu dub called Dharmayogi. When the movie first came out, critics gave it rave reviews, praising Dhanush's performance. Trisha received the Tamil Filmfare Critics Award for Best Actress. In 2018, the movie was remade in Kannada as Dhwaja. 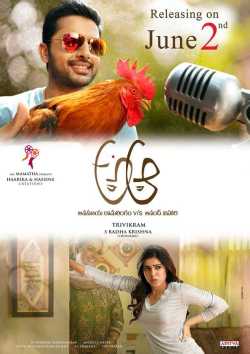 Trivikram Srinivas wrote and directed the 2016 Telugu romantic comedy family drama film titled A Aa. Nithiin, Samantha, and Anupama Parameswaran appear in the S. Radha Krishna-produced movie, which also features support performances from Ananya, Rao Ramesh, Srinivas Avasarala, Naresh, Nadhiya, Jayaprakash, and Easwari Rao. The soundtrack and score for the movie were written by Mickey J Meyer.
The movie is loosely based on Yaddanapudi Sulochana Rani's novel Meena, which was previously made into the Krishna-starring 1973 film Meena by Vijaya Nirmala. The story revolves around Anasuya Ramalingam, the daughter of wealthy and strict businesswoman Mahalakshmi, who falls in love with her cousin Anand, a former chef, while visiting her aunt in a village.


Principal photography for the movie began in October 2015 and completed in April 2016 after it was first announced in September 2015. The movie finally debuted on June 2, 2016, following numerous delays. For her portrayal of Anasuya Ramalingam, Samantha received numerous honors, including Best Actress at the 64th Filmfare Awards South and Best Performance in a Leading Role at the 2nd IIFA Utsavam Awards. The movie did well at the box office and finished the year as the eighth-highest-grossing Telugu movie. 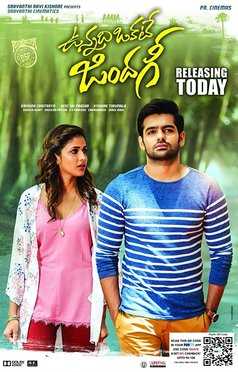 There is only one life is the title of Kishore Tirumala's coming-of-age drama film Vunnadhi Okate Zindagi, which was released in 2017 in the Indian Telugu language. Ram Pothineni, Lavanya Tripathi, Anupama Parameswaran, and Sree Vishnu are the film's lead actors. The movie premiered on October 27, 2017. Under the auspices of Sravanthi Cinematics and PR Cinemas, it was produced by Sravanthi Ravi Kishore and Krishna Chaitanya.

The Hindu's Sangeetha Devi Dundoo wrote: This movie has a lot going for it, yet it also feels stretched. It would have made a good coming-of-age buddy movie with a clearer story . The Times of India awarded three stars out of five and noted: The locations in Vizag and Ooty add to the film's relaxed atmosphere and it is well shot. Onscreen, Devi Sri Prasad's music translates better than expected . According to IndiaGlitz, who scored 2.5 out of 5 stars, The plot is intriguing. The conversations are fun. But the narration suffers from the slow pace and clichéd elements.

Written by Sukumar and directed by Palnati Surya Pratap, 18 Pages is a romantic comedy. was created by Bunny Vas. Nikhil Siddhartha and Anupama Parameswaran play the main lead roles in the film, and Gopi Sundar composed the music.

Mallik Ram directed the romance comedy and entertainment film Tillu Square. Siddhu Jonnalagadda, Anupama Parameswaran, Fish Venkat, and many other actors have been cast in supporting parts as well as the primary protagonist roles in the film. Sai Prakash Ummadisingu handled the cinematography, while Ram Miriyala composed the soundtrack. Navin Nooli handled the editing. The movie is made by Suryadevara Naga Vamsi and distributed by Fortune Four Cinemas and Sithara Entertainment. 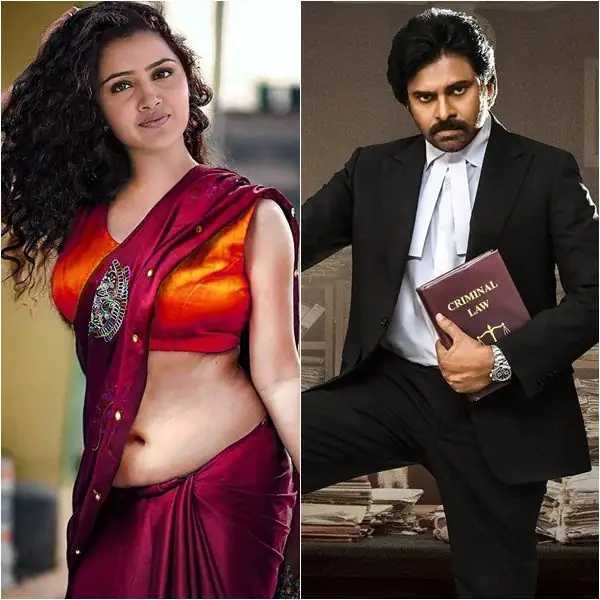 Anupama Parameswaran, best known for playing Mary George in her film debut Premam in Malayalam, has made news once more. The actress made a mistake when evaluating Pawan Kalyan's most recent movie, Vakeel Saab, which put her in the spotlight. Anupama tweeted the following after seeing the movie: I watched #vakeelsaabonprime on @primeVideoIN last night. Must admit, strong performances with a striking message! With the three starring ladies, #nivetha #ananya #anjali @prakashraaj sir, @PawanKalyan removes barriers and makes the story stand out. The movie wouldn't be complete without you.

Fans of Pawan Kalyan immediately noticed that Anupama used their favourite actor's name when speaking to him. In the comments section of her post, she received abuse for the same. When Anupama referred to Prakash Raj as Sir rather than Pawan Kalyan, the super star actor's supporters took exception. With all due respect and love, she instantly corrected her error and said, So sorry guys... just now I realised @PawanKalyan gaaaru. 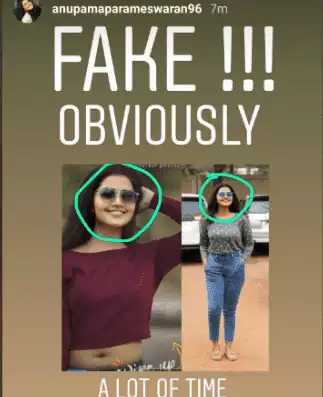 Anupama Parameswaran recently reported a hack on her Facebook account to the Cyber Crime Police. The Premam actress was upset when the hacker released some of Anupama's modified images. Anupama notified her followers on social media about filing a complaint. Surprisingly, the hacker had changed Anupama Parameswaran's face into a different image that displayed a woman's navel. Anupama was incensed when she saw this and posted the original image while requesting that the hackers work on something else instead of this.

There Her net wealth is not well-documented, but some reports claim that she costs between 50 and 70 lakh rupees every movie. Additionally, Her whole net worth is 16 crore, which is equivalent to 2.2 million USD.

All social media platforms have Anupama Parameswaran's account, and she frequently posts images there, keeping her in the news. Fans are really enamoured with her, and because of her attractiveness, she is well-liked on social media. She is very well-known on Instagram, where she regularly shares her most recent photos with her followers. Her Instagram account has more than 1000 posts, and she has more than 8.6 million followers. She typically shares more than 5 to 7 photos with her followers each week.

She has a sizable following on Facebook, where she is also accessible. Her Facebook account has 8.8 million total followers. Additionally, she has a Twitter account, where she has 2.5 million followers. Wikipedia also has a page dedicated to Anupama Parameswaran. You can access their profiles directly by clicking on the links to all of their social media accounts that we have provided below.

The actors Aamir Khan and Chiranjeevi, as well as the actress Anushka Shetty, are among Anupama Parmeswaran's favourites. She enjoys both dancing and walking a lot. She takes her family on vacation and never stops seeing new places. When it comes to colour preferences, they prefer the shade of yellow. She prefers to eat mostly Sadhya and South Indian cuisine. Ooty is her favourite location. 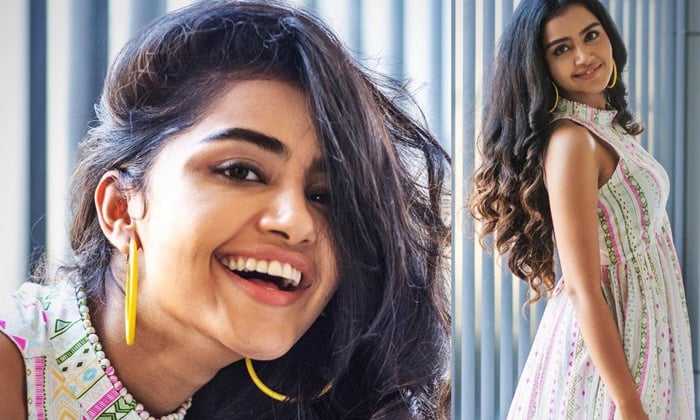 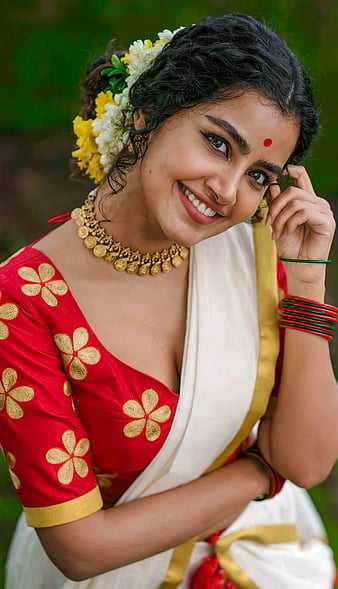 Who is Anupama Parameswaran?

Anupama Parameswaran is an Indian actress.

What is Anupama Parameswaran's salary?

It is allegedly said that Anupama Parameswaran salary is 60 Lakhs rupees per movie.

What is the age of Anupama Parameswaran?

What is the first movie of Anupama Parameswaran?

Who is Anupama Parameswaran's Mother?

How does Anupama Parameswaran earn?

What is Anupama Parameswaran's net worth?

What are the best movies by Anupama Parameswaran?

Who is Anupama Parameswaran’s Father?

When is Anupama Parameswaran's birthday?

Anupama Parameswaran’s birthday is on 18 February 1996.
×