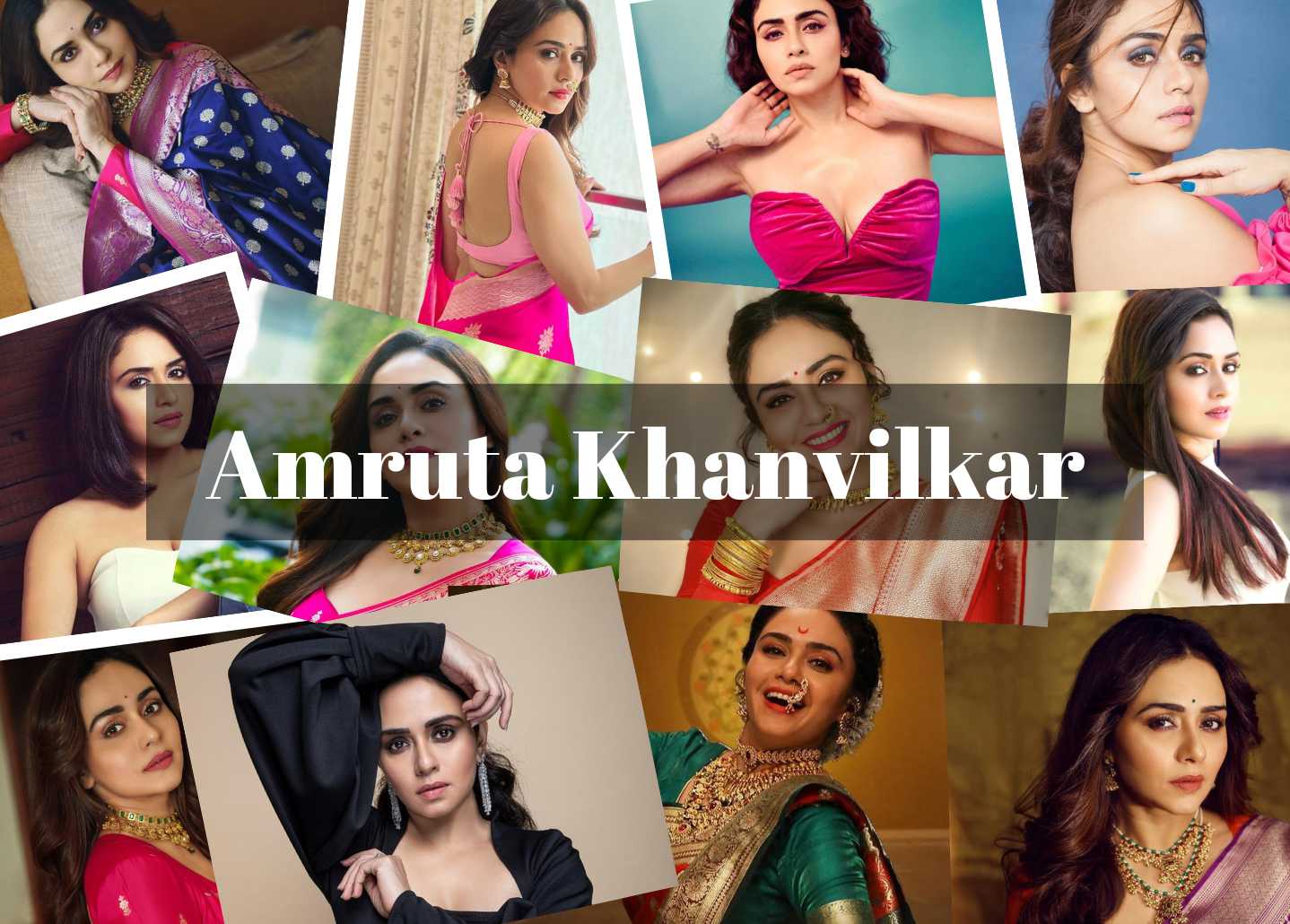 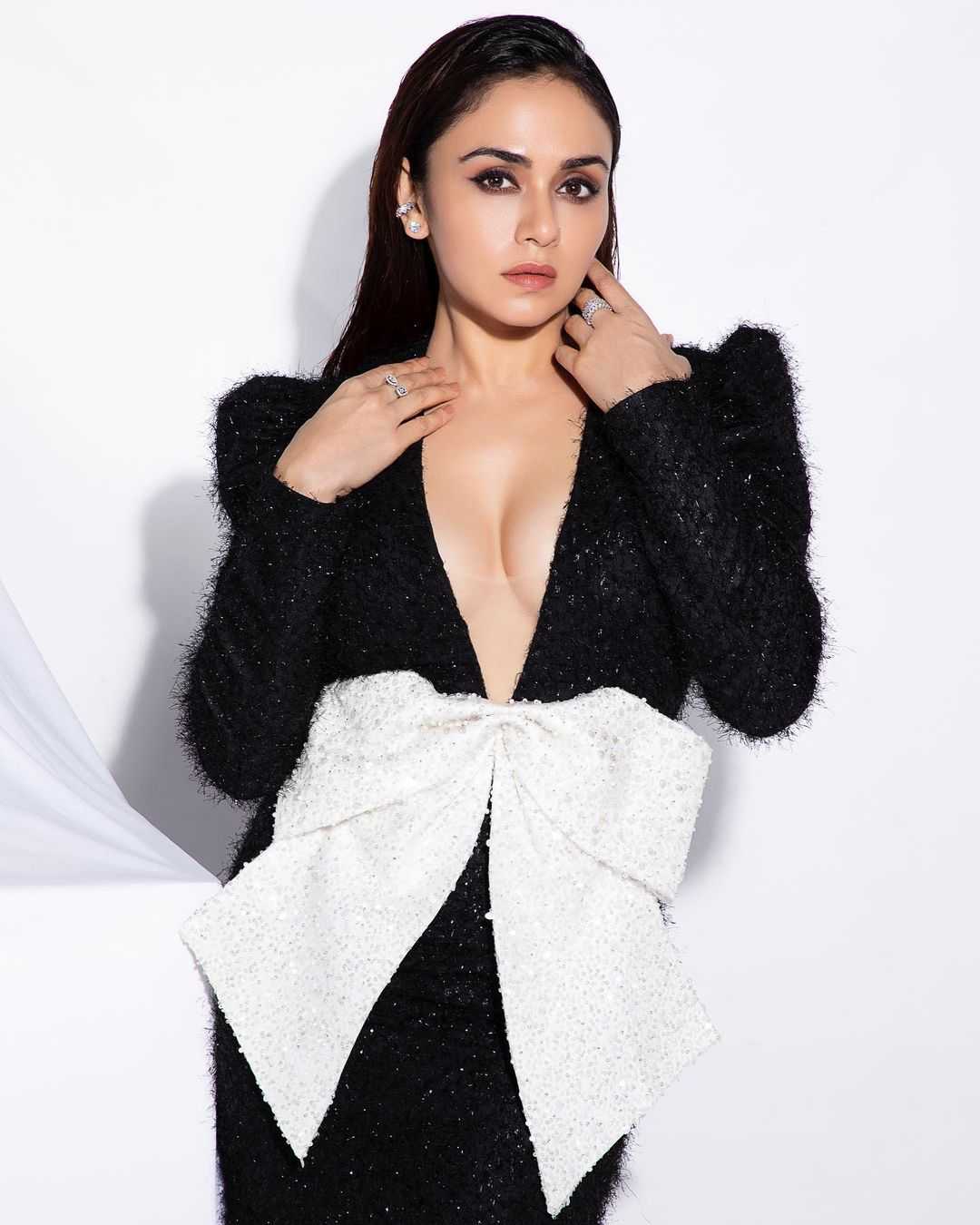 Amruta Khanvilkar, an Indian actress for both film and television, was born on November 23, 1984. She primarily appears in Marathi and Hindi movies. Amruta Khanvilkar started her career as a competitor on India's Best Cinestar Ki Khoj in 2004. She had always wanted to be an actress in movies. Golmaal (2006) was her first Marathi movie, and Mumbai Salsa (2006) was her first Hindi movie (2007). Commercial success followed with Saade Maade Teen (2007) and Phoonk (2008). Her Lavani dance performance of Wajale Ki Bara from the Marathi film Natarang helped her become well-known in 2010. She received plaudits for her portrayal in the critically acclaimed Katyar Kaljat Ghusali in 2015, and she was nominated for both the Maharashtra State Film Awards and the Marathi Filmfare Awards.

Amruta Khanvilkar has also participated in reality TV series like Nach Baliye 7 and Fear Factor: Khatron Ke Khiladi 10. She has also anchored Dance Maharashtra Dance - Season 1 (2012), Dance India Dance 6, and Famously Filmfare Marathi, among others (2018). She also made an appearance in the 2009 track Aye Hip Hopper by Ishq Bector. 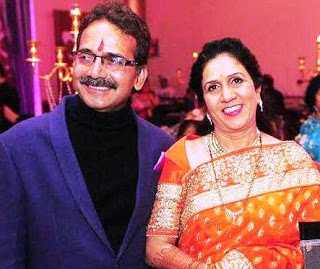 Amruta Khanvilkar was born to a Maharashtrian family in Mumbai in 1984. She attended the Karnataka High School in Pune and received her degree in commerce from the Marathwada Mitra Mandal College in Pune.

At the performance of India's Best Cinestar Ki Khoj, the couple got together. The contest sought to identify the top actors. But it had instead identified the top couples. This whole thing began in the year 2004. During the show, they both first become close friends. And even after the program, they continued to see each other, who quickly became close friends.

It was not an easy road. They both had a very difficult time. They have experienced difficulties in their career. but have remained close though all of the difficult times. Before the show, the pair hardly knew one another. They had entirely dissimilar origins. various casts, and even various cities But they were drawn together by fate.

Additionally, they have shared many enjoyable moments and are well-familiar with one another. All of their photos clearly show this fact. They both look stunning together and seem quite content to be together. And because of this connection, they were able to advance their romance.

The couple went above and beyond in their love. by taking part in a reality dancing competition. Himanshoo joined in despite not knowing how to dance. Because Amruta was a phenomenal dancer. Himmanshoo first ran into some issues. But afterward, there was fierce competition. The amusing aspect was that he didn't only put other couples up against one another. But even Amruta had to compete with him.

Amruta acknowledged this truth. Even though she followed all the instructions precisely, Himmanshoo was not present. But the judges thought Himmanshoo's dancing was excellent. as he delighted in dancing. He received a tonne of love. With their incredible dance skills and Amruta's commitment. The pair took home the prize.

Amruta abruptly blocked Himanshu one lovely day. Even more, she unfollowed him on all social networking sites and blocked his phone number. Many theories are generated by Amruta's actions. People believed they had marital issues at the time. There was a minor fight, which is common. The reality is that they have a fulfilling marriage. Furthermore, they get along well.

Amruta Khanvilkar started her career in 2004 as a participant on Zee Cine Star ki Khoj, one of the earliest reality programmes on Indian television. That same year, she also co-starred with Amitabh Bhattacharjee in the Hindi short film Saanjh, which was produced by the Film and Television Institute of India. She went on to make additional appearances in 2005 on the television programmes Ada and Time Bomb 9/11, and she also won the first runner-up spot in the Marathi reality competition Eka Peksha Ek (2007). 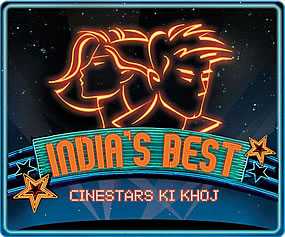 The Best Cinestar in India An Indian television programme called Ki Khoj made its debut on Zee TV in 2004. A starring role in a movie is the first prize in this talent competition for budding actors. At the conclusion, a male and female winner are declared. In 2006, 2014, and 2021, the programme returned for its second, third, and fourth seasons. Sarwar Ahuja and Aditi Sharma were the first season's winners.
Amruta Khanvilkar came third in the show. 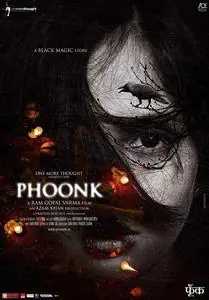 Ram Gopal Varma and Praveen Nischol's 2008 Indian supernatural horror thriller Phoonk, which translates to Blow, features supernatural elements. In addition to Kenny Desai, Ashwini Kalsekar, and Zakir Hussain playing supporting roles, the movie stars Sudeep, Amruta Khanvilkar, and Ahsaas Channa in the key roles. Black magic and superstition are the basis for the movie. When the movie debuted on August 22, 2008, numerous media sites hailed it as a box office smash.

A Hindi news programme that regularly broadcasts articles about black magic served as the inspiration for Varma's movie. The plot of Phoonk has themes with Yandamuri Veerendranath's suspenseful Telugu novel Tulasi Dalam. For those who see the movie by themselves, a reward of 5 lakh (US$6,300) has been announced.

Phoonk, directed by Ram Gopal Varma, was a box office hit. After an impressive promotional effort, the film premiered. It, along with its movie office success, helped it make money for its backers. It received a lot of attention thanks to the creator's Rs. 5 lakh challenge, especially from younger viewers. 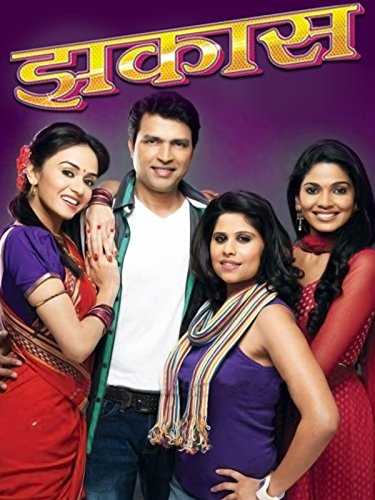 A debonair slick gracefully juggles relationships with three unknowing ladies, but their friend-zoned admirers continue to harbour suspicions about him. So, to prevent his hoax from backfiring, he strikes a deal with the trio of lovers.

Ten famous couples from television compete against one another in this game show. Every week, the subject, music, and styles of the contestants' dances change, and the judges award points. Based on public vote and their scores, one couple is removed every week. An Indian Hindi-language celebrity dance reality television programme called Nach Baliye  airs on Star Plus. Nach Baliye 7 is the seventh season of the dance reality show, Nach Baliye.


The series, which was produced by Ekta and Shobha Kapoor under the brand of Balaji Telefilms, debuted on Star Plus on April 26, 2015. It aired every night from Monday through Saturday and every evening on Sunday. Season 2015 concluded on July 19, 2015. Rithvik Dhanjani and Karan Patel served as the event's hosts. The judges were Chetan Bhagat, Preity Zinta, and Marzi Pestonji. In a special episode, Salman Yusuf Khan, Mukti Mohan, Sargun Mehta, Kunwar Amar, and Karanvir Bohra also made appearances. Amruta Khavilkar and her husband Himmanshoo were the winners of the show. 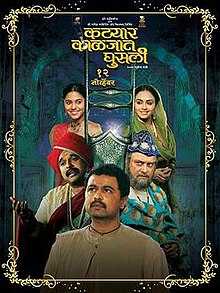 A dagger through the heart is the subtitle of Katyar Kaljat Ghusali, an epic musical drama film produced in 2015 in the Indian Marathi language. The movie, which is directed by Subodh Bhave, also has Shankar Mahadevan, Sachin Pilgaonkar, and Subodh Bhave in the key parts. Shankar Mahadevan makes his theatrical acting debut in the movie, and Bhave makes his debut as a director.

The first performance of the Purushottam Darvhekar-penned play took place in Mumbai in 1967, and one of the main characters was Hindustani classical singer Vasantrao Deshpande. The drama was reintroduced in 2010 with Mahesh Kale and Rahul Deshpande, the grandson of Vasantrao Deshpande, playing the lead roles. Some of the songs from the original play, which was written by Jitendra Abhisheki, were included in the soundtrack for the movie, which was composed by Shankar-Ehsaan-Loy.

In its opening week, the movie made over 80 million (US$1.0 million). The film became one of the highest-grossing Marathi films of all time thanks to the favourable reviews, earning about 300 million rupees ($3.8 million) at the box office.

Moon-faced beauty, also known as Chandramukhi, is a 2022 Indian Marathi language musical romance drama film produced by Planet Marathi, Golden Ratio Films, Flying Dragon Entertainment, and Creative Vibe. It was written by Chinmay Mandlekar and directed by Prasad Oak. Based on the same-titled novel by Vishwas Patil, the movie explores the effects of an intense musical romance between prominent Tamasha singer and dancer Chandra and aspiring politician Daulat. Amruta Khanvilkar, Adinath Kothare, and Mrunmayee Deshpande co-star in the movie as well as the title character. Ajay-Atul, a duo, created the tracks.

Chandramukhi had a successful theatrical debut. On the first day, it made 1.21 crore ($160,000).  In five days, it brought in almost 7.42 crores (US$960,000). In its first week, it made 14 crores ($1.8 million). On April 29, 2022, the eve of Eid, the movie was released with two significant Hindi films, Heropanti 2 and Runway 34. In addition to performing well at the Indian box office, Chandramukhi also attracted interest abroad. In the UAE, it enjoyed a prosperous run in theatres. 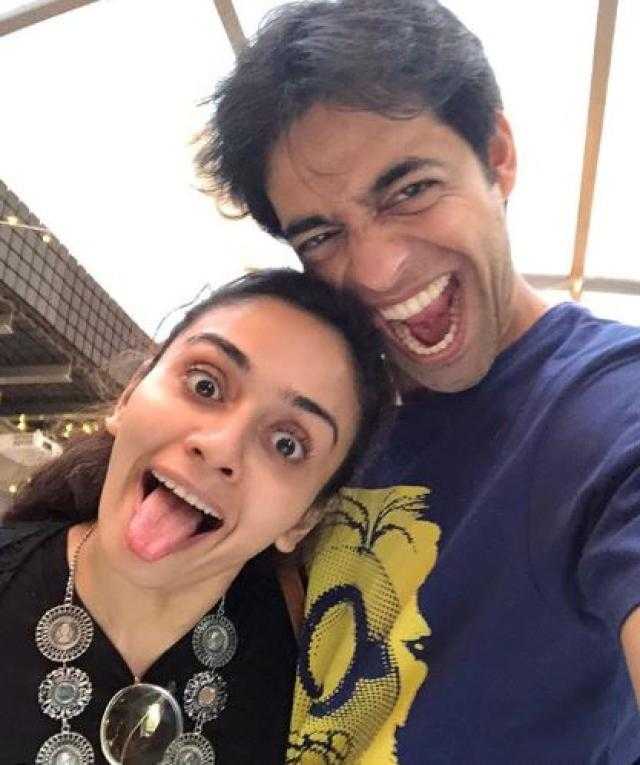 A few months ago, rumours surfaced that Himanshu Malhotra and Amruta Khanvilkar, two of the most popular stars in tinsel town, were experiencing marital difficulties. Amruta, a Marathi actress, startled their admirers by unfollowing her spouse Himanshu on her social media account. In an interview with the Bombay Times, the actress explained why she stopped following her spouse Himanshu.

Amruta explained why she got Himanshu's number and social media accounts restricted in an interview with the Bombay Times. The actress disclosed: The next morning, when I unlocked his phone, I realised how foolish I had been. Himanshu claimed that he tried to phone me repeatedly during the night but was unsuccessful. It was a last-minute decision, and I had no idea that it would spark rumours about potential marital problems.

Amruta revealed that she had to block Himanshu's phone since she wanted to speak with him for a long time but he kept reminding her that he had a 5 am shoot that required him to get to bed early. She explained, I am not a very articulate person, therefore I was unable to express to him how much I missed him. We eventually got into an argument, and he hung up. In the midst of my rage, I blocked his phone number and unfollowed him on social media. 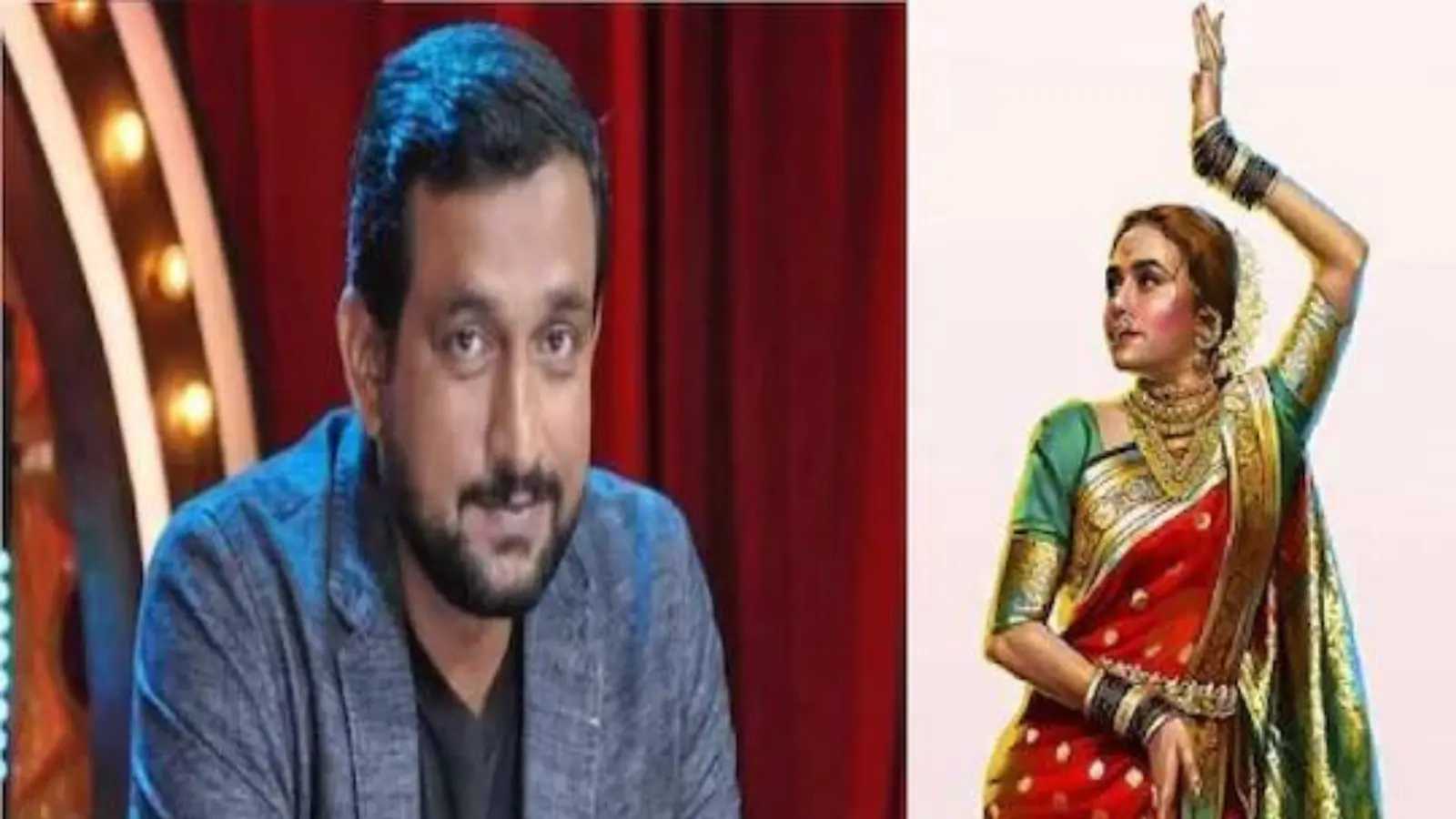 The actress who will portray Chandramukhi's key part hasn't been named by the film's creators. With the release of the movie's poster, Amruta Khavilkar's identity was finally made public, putting an end to all rumours.

While congratulations for Amruta are coming in from all over the world, actress and dancer Mansi Naik has caused a controversy. She insisted that she was first approached by Prasad Oak for the role of Chandramukhi and that she would have made a better Chandramukhi. Prasad Oak appeared to put an end to the commotion by stating that Amruta was the first and only candidate for Chandramukhi.

Amruta Khanvilkar is one of the wealthiest and most well-known movie actresses. Amruta Khanvilkar's net worth is roughly $1.5 million, according to our analysis of data from sources like Wikipedia, Forbes, and Business Insider. 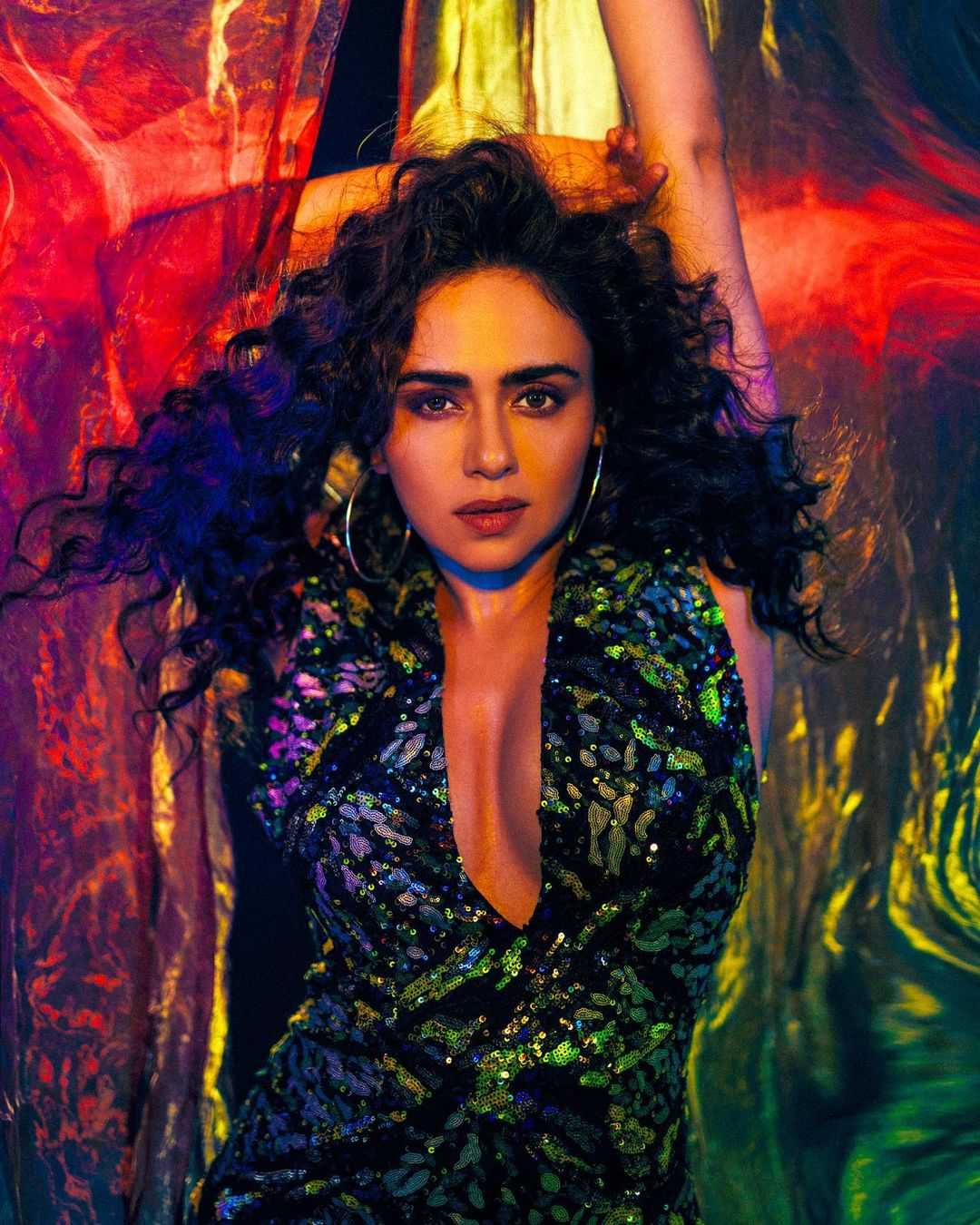 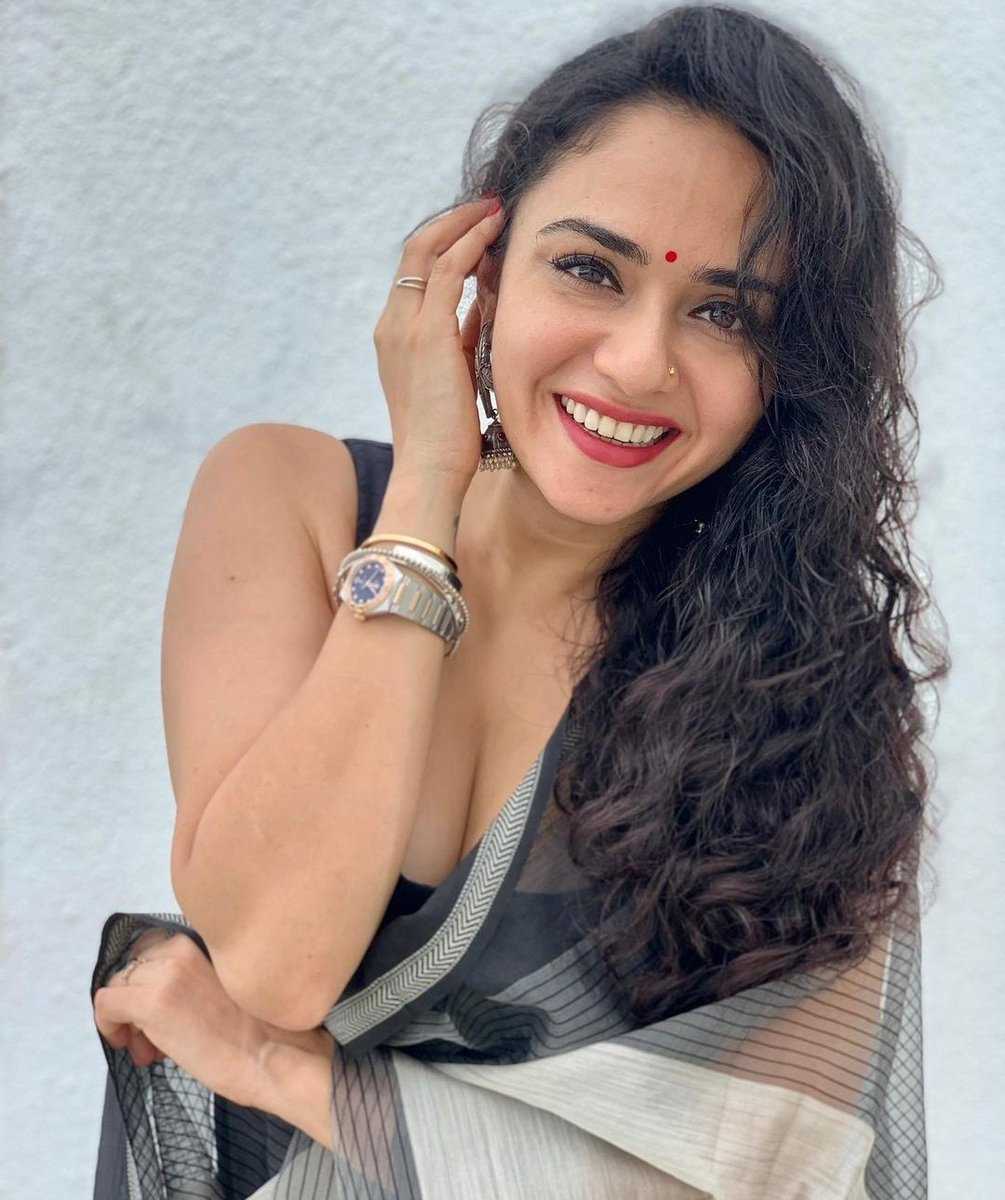 Who is Amruta Khanvilkar?

Amruta Khanvilkar is an actress in mostly working in Marathi film Industry In India.

What is Amruta Khanvilkar's salary?

It is allegedly said that Amruta Khanvilkar salary is 11 Lakhs rupees per month.

What is the age of Amruta Khanvilkar?

What is the first movie of Amruta Khanvilkar?

Who is Amruta Khanvilkar's Mother?

How does Amruta Khanvilkar earn?

What is Amruta Khanvilkar's net worth?

Amruta Khanvilkar has a net worth of $1.5 million as of August 2022

What are the best shows by Amruta Khanvilkar?

Who is Amruta Khanvilkar’s Father?

When is Amruta Khanvilkar's birthday?